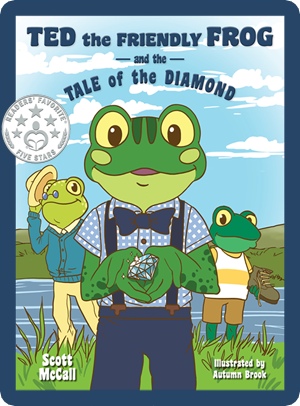 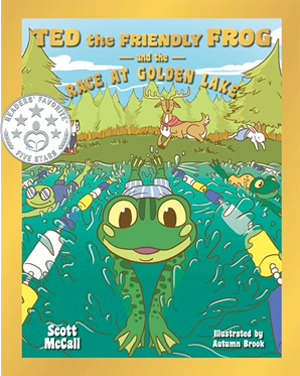 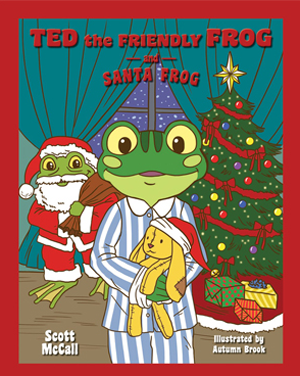 A TALE OF FAMILY, FUN, AND FROGGY ADVENTURES!

Ted the Friendly Frog and the Tale of the Diamond captures the journey of a brave, adventurous frog as he encounters meaningful challenges and teachable moments. With a significant purpose behind his story, author Scott McCall shares lessons for young readers through the first release in his Ted the Friendly Frog book series.

McCall’s adorable character, Ted, lives by a pond and spends his froggy days playing with his friends, hopping in the grass, and swimming very fast. One day, Ted's grandfather tells Ted something important - he's going away for a few days, and could Ted look after his special diamond? Ted must not play with the diamond with his friends or even show anyone, for it is an old tradition to pass the diamond down to the next frog in the family, and it's a very valuable stone.

In a bouncing and rhyming tale, Ted learns the important lesson of listening to his family, even if it is more fun to play, and discovers it is never too late to learn from a mistake.

THE RACE IS ON!

Ted has a big race coming up—the race at Golden Lake! Last year, he only placed seventh, but this year he’s hoping to win the whole thing. When Ted gets a little lost in the woods on the way to the race, he meets all sorts of new friends as they work together to help find his way back. Once the race begins, Ted finds himself in a tough spot, and he must decide between going for gold or learning from the lesson his new friends have taught him and helping someone in need.

Join Ted in the second book of Scott McCall’s fun froggy series, Ted the Friendly Frog and the Race at Golden Lake, and learn how helping a friend can make you feel more like a winner than any trophy!

'TIS THE SEASON WITH TED

Ted and his brother Brad are snuggled up by the fire on Christmas Eve, waiting to hear the story of Santa Frog. Their father tells them an incredible tale of the time he met Santa Frog, and they can't believe their ears! A frog in a red coat, flying a sleigh pulled by nine birds, leaving presents under Christmas trees; it almost sounds too good to be true. When the story is done, Ted and Brad can't wait to see if Santa Frog comes again that night. Will Ted get to meet Santa Frog this Christmas? See if his holiday wish comes true in Ted the Friendly Frog and Santa Frog, the third release in Scott McCall's book series.

"A delightful story that captures our imagination and reminds us of the value of loving and trusted relationships."
— Jim Turner | Former US Congressman and Texas State Senator

"The moral of the story is that we should always follow instructions from either our parents or grandfathers when we are young, and when we become adults, we have to be held accountable for our actions. I would enjoy reading more about Ted the frog and his adventures."
— Joni K. Clonts | Mayor of Crockett, TX

"Ted is quite a character, even for a frog. His adventure seems to turn out well because he does the right thing, if not initially, eventually."
— Mike McKinney M.D. | Former Chief of Staff for Texas Governor Rick Perry

"Having played sports most of my life, I can relate to what Ted experiences in this book. Ted is a great character for readers to follow along with and learn important lessons they can use every day."
— Steve McKinney | Former NFL offensive lineman

"What a fun book! Ted learns that within us, we have hidden strengths that are just as valuable as being first in the race. With rhyming and adorable characters, Ted the Friendly Frog and the Race at Golden Lake are winners!"
— Katie Jensen | Former swimmer and conference record holder at Brigham Young University

"Redefining the true meaning of a ‘winner’, this story teaches values such as teamwork, sacrifice, sportsmanship and helping others - values that can be overlooked in today’s competitive world."
— Rhonda Long | Former Dallas Cowboys Cheerleader